ANDREA SOBOTKOVÁ & MARTIN CHLANDA: THE AREA LOOKS SMOOTH. I JUST PICKED OUT A DISTINGUISHABLE CRATER NEARBY AND MARKED ON IT. 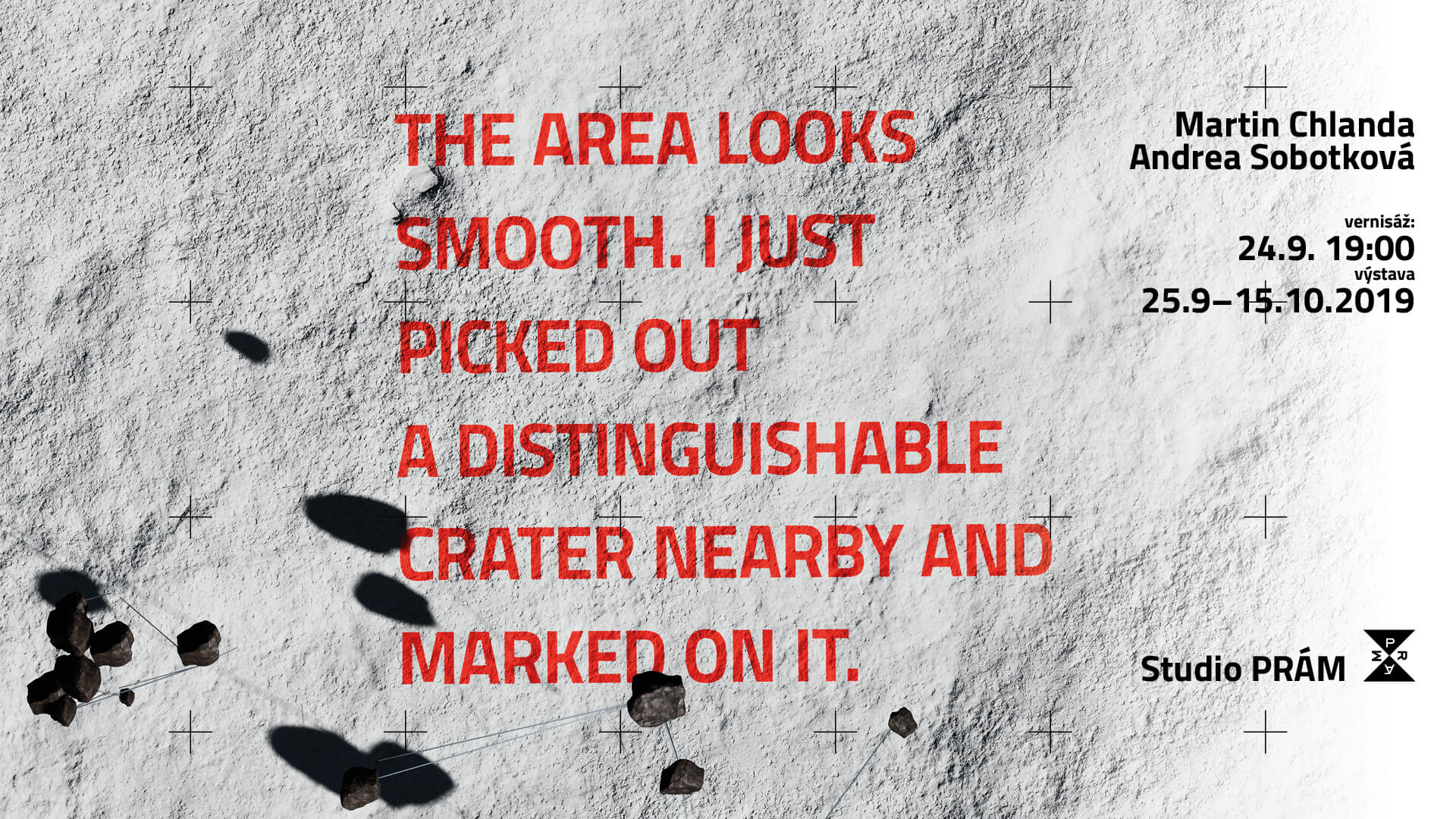 We cordially invite to the site-specific exhibition made by Andrea Sobotková and Martin Chlanda. The opening of the exhibition is on Tuesday September 24th, 2019 at 7pm. The exhibition lasts till October 15t, 2019.

‘The extraordinary images of the Earth offered by the portholes of the first spacecraft caused the idea of nature in the landscape to escape the boundary of a scenic cut-out. The landscape suddenly became planetary and as such has embraced and expressed deeply linked ecological principles. The impact of local events on regional, continental and global ecology was now quite obvious, as was the fluid nature of water, air and even the movements of the Earth’s crust, which were now visible to all.’ (James Corner: Recovering Landscape as a Critical Cultural Practice)

One of the early speculations explaining the origin of the Moon, Fission Theory, suggested that the Moon broke off the Earth’s crust due to centrifugal force, leaving behind today’s ocean floor as a scar. As a result of tidal forces, the Moon was deformed and its centre of gravity moved towards the Earth. This mutual correlation of Earth and Moon, both poetic symbolism and factual similarity in the transformation of landscape are the starting points of the exhibition The area looks smooth. I just picked out a distinguishable crater nearby and marked on it.

The artists turned their attention to the Earth – the moon-like landscape of an open-cast coal mine in northern Bohemia, where they worked on reconstructing the disappearing landscape through archaeological exploration activities.

As a result of coal mining, sedimentation layers are reversed – clays and rocks are transported to dumps, which create a new horizon, restricting views of the surrounding landscape. Bare coal seams are exposed to wheels of mining machine. The ancient bond with the Earth is broken and the torn off material leaves traces in the form of stratified craters in the moon-like landscape, probes sounding the history of (seemingly) random processes of crashing, spill-over, rotation, sedimentation, erosion, wrinkling…

The artists treated the space of the gallery as a threshold to their own work. In the floor plan of the gallery, transported into the mine environment, the pair carefully searched for coal fragments and had their positions determined planimetrically and altimetrically by means of geodetic surveying. They then displayed the coordinate system against the redefined zero horizon (the gallery), accentuating the disruption of the material link with the Earth – similarly as occurs in the mining process itself.

In the installation we observe a levitating constellation of material that replicates the features of the original landscape. Through the space of the gallery, a new horizon expands with respect to human perspective. We perceive the resulting work in the context of dragging one space into another. The space is shaped by objects and at the same time it shapes them itself. The material refers to the creative processes of the past that constitute the present – like the sedimentary layers present in the actual space.

The project was developed in cooperation with Martin Suchý, to whom we owe our huge thanks for the work he has done and his enthusiasm.

Thanks GoOut for a PR support.