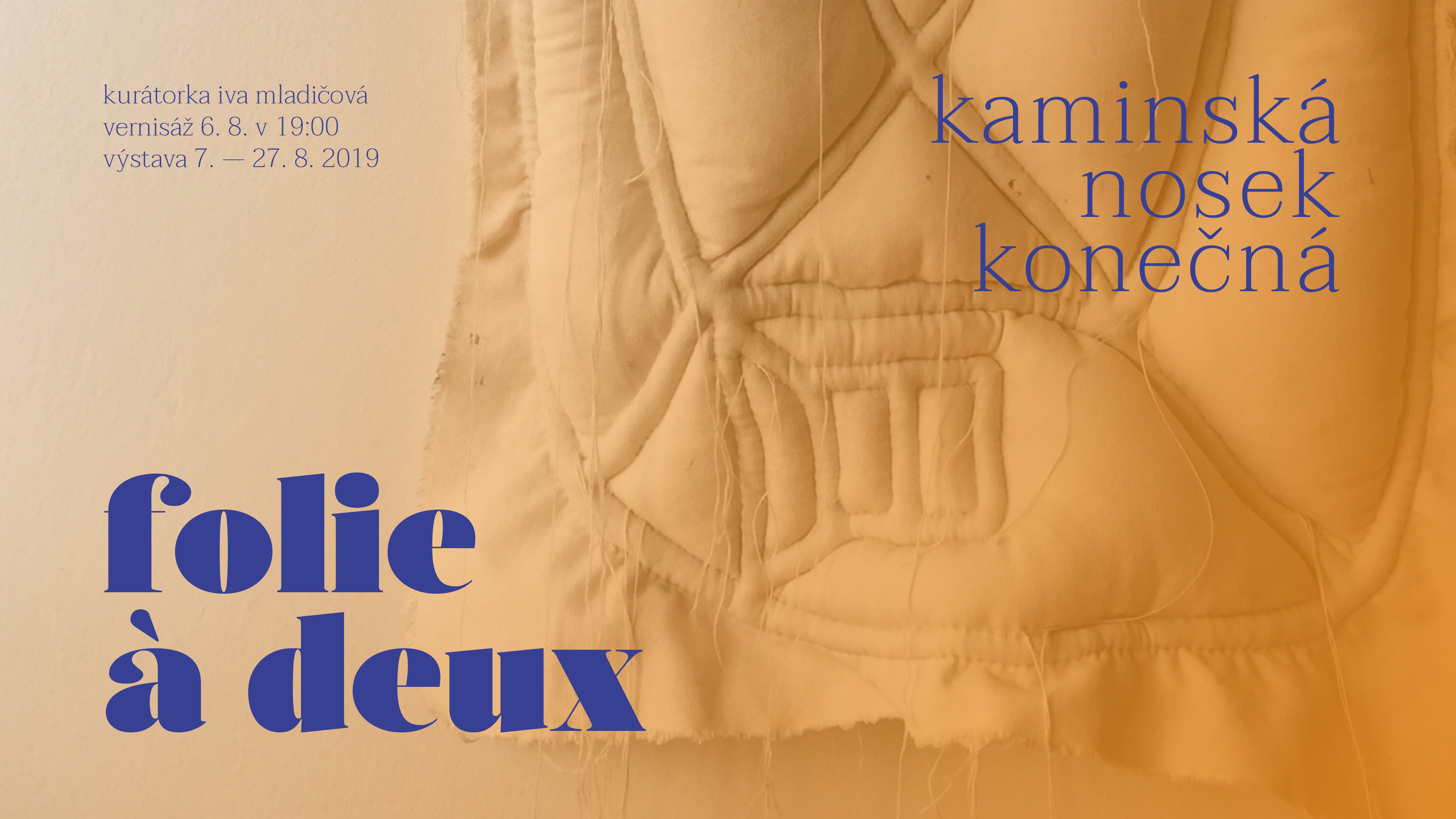 Folie à deux is an exhibition from artists Michael Nosek, Eliška Konečná a Miriam Kaminská and is curated by Iva Mladičová. The exhibition opening is on Tuseday 6th August at 7pm. The exhibition lasts till 27th August, 2019.

Karel Kostka in his publication subtitled A General Theory of Consciousness, Time, Space and Being, considers a coordinate system as a clearly arranged tool of our mind, one which it uses to perceive and perhaps create reality according to understandable and transparent rules. Miriam Kaminská, Eliška Konečná and Michael Nosek choose a spatial image-object as another tool for gaining awareness of the mystery of our existence. All three artists define in some way expressive possibilities through a traditional geometric ‘frame’, while at the same time they feel the need to step into the third dimension, respect the metaphorical meaning of material forms, use specific materials and create their works themselves. This exhibition presents their latest works, which are also a report on the process of desired temporary release from existing means of expression, on change as indirect information about what is permanent.

Miriam Kaminská exhibits a set of abstract watercolours combined with pencil drawing, created during her recent creative stay in Munich. The blue refers to her observation of the semantic reciprocity of word forms in different languages, now represents the emotional level of the word “blues”. Partially surrealistic compositions testify to the tension, the motif of nodal points and polarity of relaxed watercolour strokes, while the geometrized accuracy of the line pencil drawing enhances the impression of a fixed state. The work looks plastic; attention is attracted by areas of meditatively multiplied lines. The artist speaks about drawing as the recording of a spatial idea. The group expresses the ability of open self-reflection, an awareness of situations lived through. It is a paraphrase of the psychology of relationship constellations. The form of definition by the picture frame is also characteristic of the artist’s wall line assemblies, which she lets protrude from the ground plane. The most recent of these corresponds significantly with the above mentioned watercolour group.

Last year, during her placement at The Hague Royal Academy of Fine Arts, Eliška Konečná was intensively engaged in recording the occupied and lived space, painted on horizontally laid tablecloths and repeatedly conveyed the importance of background. She conceived the spatial situation of the scene as a specifically defined, self-contained, but at the same time with multiplied vistas into the surrounding exterior. We perceive a reciprocity of the introversion of thinking and extroversion of consciousness. The textile relief objects presented at the current exhibition carry the artist’s encoded theme of the ambiguity of perception: ‘I am coming to terms with the fact that my reality is not your reality’ (EK). The combination of accentuated or disappearing sewn lines and the direct haptic plasticity of the textile material are the basic expressive elements used. In them we also find a transcript of a particular space and a lived situation – on the hanging textile part, it is stylized in geometrized simplicity, on the wooden supporting part it comes in the form of an engraved drawing of a comics character. Eliška Konečná’s works to date testify to the distinctive conceptual level of her artistic approach; she reflects on the truthfulness of a picture, moves on the boundary between free/applied, and hangs some of her objects on real hangers. She has long been interested in the theme of sharing, and, through dealing with plastic hapticity, in her current group she is getting closer to the sculptural interpretation of ‘reality’.

In his earlier works Michael Nosek concentrated on individual identity. Characteristic are his self-portraits painted on the basis of a long glance in the mirror, as well as knitted embroidered balaclavas whose experienced interior space the artist subsequently reflected in large-format paintings. Then a set of colourful embroidered canvas masks followed. Michael Nosek mentions dissatisfaction with the expressive insufficiency of painting. This statement may be due to the subconscious effort to tip the theme over to an objective level, the latest work being a textile spatial object, a paraphrase of the Slavic totem pole. He transcribes elements from the iconography of Slavic legends and myths into simple figurative shapes and symbols. However, the compiled spatial object is in fact a set of multiple image formats. The current absence of vivid colours, obviously present in the artist’s earlier paintings, is striking. His earlier fixation on the perfection of realistic painting has now probably melted into the direct reality of using textiles and the process of sewing itself. The artist even speaks about the sculptural character of the work, when the final form emerges from a lengthy creative process. In terms of form and theme, he repeatedly echoes Eliška Konečná’s artistic thinking; both now share the idea of a symbolic haptic space whose walls are covered with textile sewn relief images. Such an intention may express the effort to work with experience within the archetypal matrices.

Finally, let us return to one of the ideas presented in the introduction itself, because the works of Miriam Kaminská, Eliška Konečná and Michael Nosek are relevant contributions to a general theory of consciousness, time, space and being. ‘If we dive into the depths of the world, we find that the only objective reality in it is our consciousness,’ states our author, adding with regards to the impossibility of precisely grasping the permeation between the subjective and objective world in general: ‘We are a mirror that reflects all conceivable mirrors of the world. With just a single movement, a single thought or any other act, we change the images in all the other mirrors of the world, without bounds or limitations. – A multifaceted interdependent tangle of images, containing varied forms of all other images of the world, from the past, present and future. We are thus ourselves and, at the same time, everything else that surrounds us, both conceivably and inconceivably in a void where time, as in the well of being, has given us the privilege of becoming a creature with enormous creative and destructive potential. In this concept the world is the echo of our thoughts and deeds, and we ourselves are their resonance.’