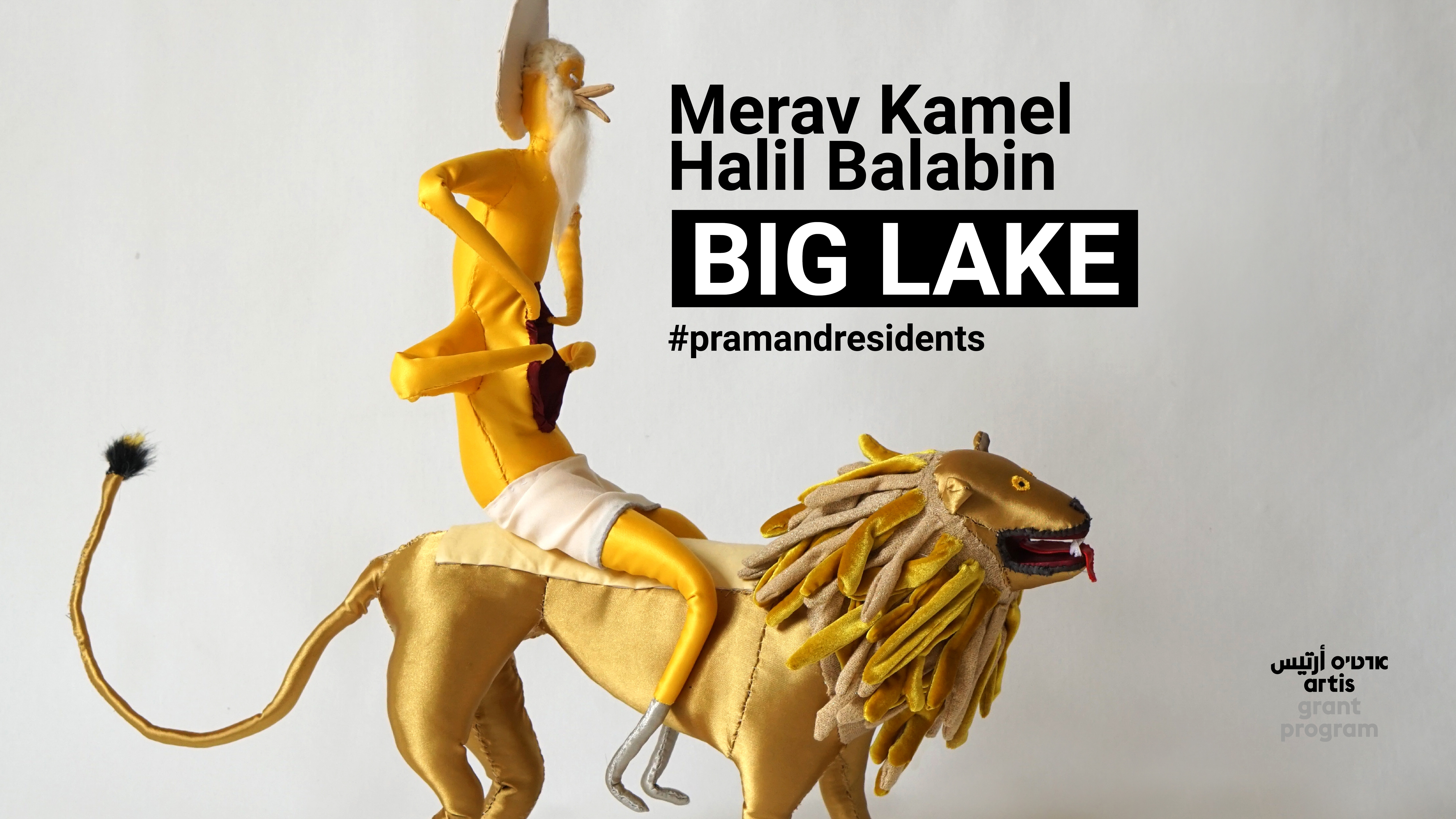 Merav Kamel & Halil Balabin are Israeli artists which spent a few weeks as the artists in residence at PRÁM Studio. In the exhibition, curated by Šárka Basjuk Koudelová, they show their hand-sewn sculptures which represents a mixture of high and low, humorous tone with unfunny jokes, social and political critics with and attention to detail.

The composition of two hand-sewn puppets with a bow, bearing a symptomatic title Hangover, clearly indicates the archetypal mythological figure of William Tell and perhaps even more significantly points to the iconic performance by Marina Abramovič and her partner Ulay, which just has gone fatally wrong. A mixture which overcame all the theses about the postmodern a long ago. A mixture of already quoted quotations, mannerist stylization, malevolent tragicomedy or on the contrary a kind irony, but also a biblical cannon and cultural archetype. Such as that are the hand-sewn soft sculptures made by the art duo Merav Kamel and Halil Balabin and that is exactly how the contemporary world seems to be like. Current atmosphere of uncertainty, general fluidity and relativization of nomenclature, brings together at least one solid term – „anxiety is the new black“. Anxiety stemming from world cultural conflicts, rewriting terms and finding out that the foundations of our proud society are not that solid as they seemed to be, is also the subliminal bottom line of otherwise visually kind, high-aesthetic and ergonomic stylization of these small hand-sewn soft sculptures.

Merav and Halil come from a place, which seems to be an essence and concentrate of all the social circumstances mentioned above. Thousands of years of mixing religions, the earliest foundations of the world culture and, above all, the ongoing conflict, in which events described in the Bible and archaeological finds from BC have been seriously debated, as if somewhere between Israel and Palestine have marked a spring from where the current mood spreads to the world like the weather. The current forecast is unambiguous in its ambiguity – decent icons become picturesque puppets and socio-political events resemble mannerist theatre in which illusions exist only. It is historically proved that such a situation paradoxically produces a creative space sparkling with surprising reactions. Merav Kamel and Halil Balabin, after graduating from the Bezalel Academy of Art and Design in Jerusalem, had both begun separate „academical” careers in conceptual drawing installations. Their hand-sewn soft sculptures were initially made as their common merch – a sales crafted article looking for their buyer at the Tel Aviv art markets. However, the naturally used detached view and the household idols like scale have caused the opposite – these metaphorical objects have attracted serious art scene and merged into the syncretical creative line of both artists. Puppets waiting for their choreography and spectators have become a kinder reflection of theatrical political gestures. Merav and Halil travel with them in the suitcase from  place to place, from one institution to another and in the most positive sense of the word they fulfill the idea of the nomadic theatre with a critical cantastoria.

The variations and combinatorics of the figural compositions seem to be an infinite and inexhaustible stream in the creative strategy of Merav and Halil. The contemporary society creates a reality so extreme, that it is possible to literally catch each mutation “out of the air”. Animal, human, God – does it still matter? The morphology of the figures reminds us of creatures similar to scorpions, who, surprised run away with the digitally sequential step of their paired limbs, when we lift up a stone in the middle of a desert. They seem like they escaped through crannies from a dystopian environment, where they have been exposed to negative influences, and in addition to the distorted and mutated body made of found discarded clothes, they have developed a spiteful sense of irony.

The hand sewing process of creating the puppets itself has a distinctive and almost messianic context. Sewing together the found rests of fabrics is a meditative labour, which is not just a trendy practice of recycling, but also a strong intimate performance of healing holes with the most common methods. Is any human able to patch the world? Is art able to fulfill the role of a refreshing oasis, which alerts to problems in a peaceable, yet influential way? The name of the exhibition Big Lake was taken from the song of the same name by Israeli poet, musician and artist, Roy “Chicky” Arad. The artist who gives an impression of your friendly neighbour with a guitar while moving on an incredible line between social criticism, participation on Bienalle di Venezia and representation of Israel at the Eurovision music contest. In his lyrics titled Big Lake he calls the listener to take of his t-shirt and go for a swim with him. Merav Kamel and Halil Balabin join to this relaxing challange and prod us to make a few tempos in the waters of their imagination. Although we cannot avoid the negative effects of our society, the Big Lake exhibition represents an alternative place where all of us can meet to refresh ourselves after a long period of a devastating stress.

Supported by Artis.
Thanks GoOut for a PR support.