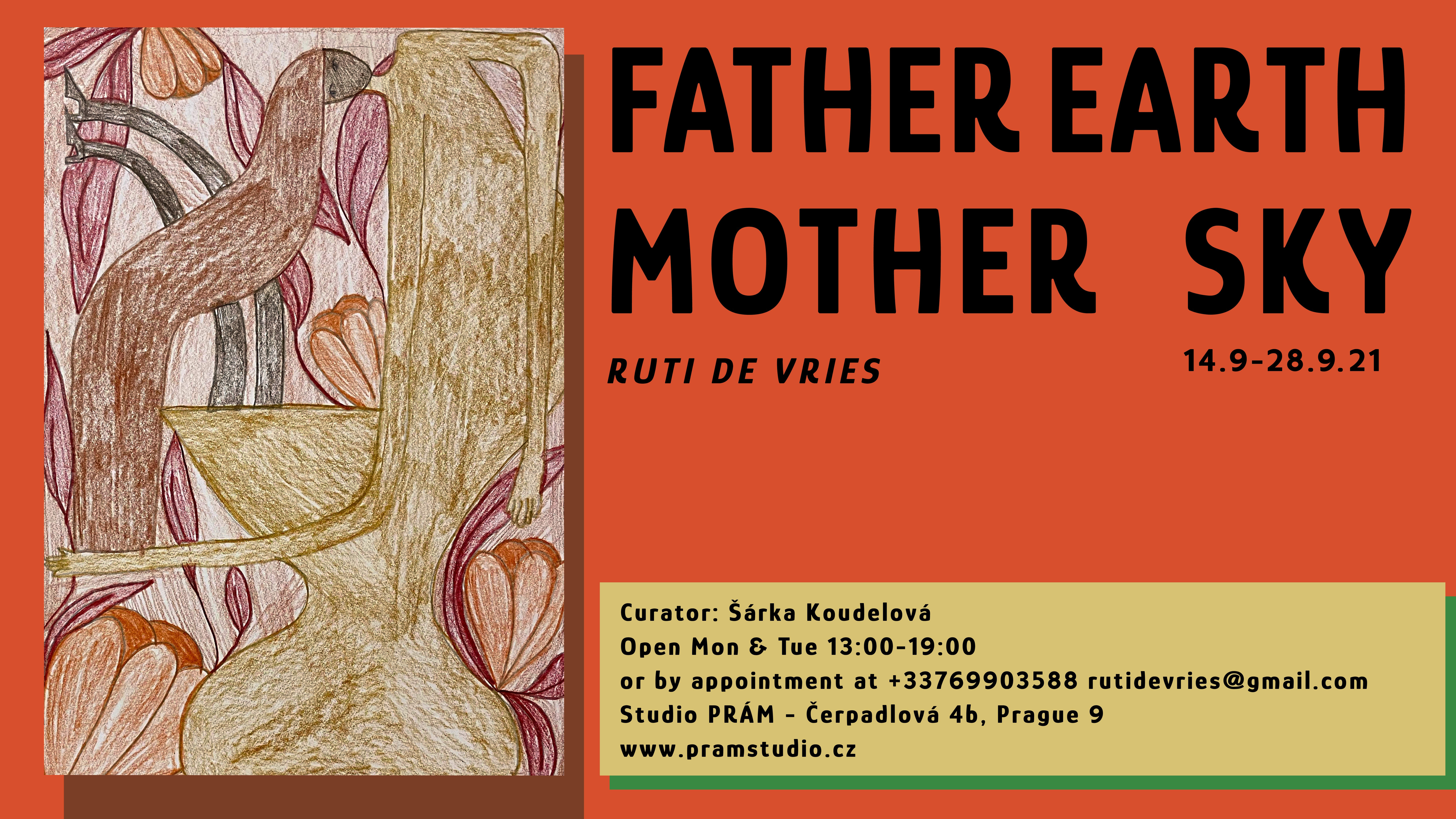 We cordially invite you to the exhibition Father Eart Mother Sky by Israeli artist Ruti de Vries and curated by Šárka Koudelová. Ruti will exhibit he artist-in-residence project whe was wrking on at Studio PRÁM.
exhibition opening: 09/14 at 6pm
exhibition: 09/15 – 28/09
curator: Šárka Koudelová

The space featuring the exhibition by Israeli artist Ruti de Vries (1989) is crowded with figures. We can learn the monumental peculiarity of each of them, or their suspected mission, from their accessories or from the surprisingly picturesque objects, which they bear in their hands as naturally as random passers-by. There is a hidden sewn painting of a crafty Discus Thrower in this diverse, yet matching group. The discus – a black dot, is present in all the artist’s exhibitions under various names and in sundry modifications. A permanently open eye, a sign, or a bouncing ball. A toy that ran away, a scattered bearing, in short, an object driven by its own physical laws, which we fail to catch. Its echo guides us through the space in a perfectly controlled rhythm, and our searching eyes intuitively flit in the desire to locate it. Up and down. Knock, knock, knock, and here and there a hollow plop, as if hitting a cavity in the floor, and a soft, inaudible sssp, as if a carpet is in the way. Or could it be a body? A rhythm getting faster the closer it is to its end. Counting that sounds like pointing with a finger or a children’s rhyme. “Tinker, tailor, soldier, sailor, rich man, poor man, …” Counting like the rhythm of a poem, the search for a centre of gravity, a role, or a decision to be made. Father, Earth, Mother, Sky.

Gravity, which is the leitmotif and symptomatic focus of the exhibition, might seem insignificant given the lightness of the material that Ruti almost exclusively uses. However, the opposite is true – the light weight of textiles allows the artist to polemicize over the force that indicates the direction of their folds and especially over the mass or substance that could put them on. Figures in space whose limbs seem elongated due to falling too fast for the human eye, as if balancing each other. Despite the apparent absence of weight and the flatness of the bodies, the resewn clothes and familiar patterns suggest to us grotesque vitality. This contradiction raises fundamental questions. Are we able to recognize whether a person or an animal is hiding behind clothes? Is clothing your second skin or in fact, the only one? If gravity limits our movements to a range of possibilities between up and down, is clothing then a necessity for flying? And most importantly – is the body just clothing? Is the dressed object also a living one? Purely fabric sculptures such as Ghost Rider or Double Flight Suit, which float through the gallery, have their grounding contrast in sculptures that combine ready-made objects with textiles. Cupboard Woman and Fridge Man are originally worn-out pieces of equipment from human lives, which Ruti dressed with almost gentle care.

Interestingly, Ruti de Vries is already the third (or more precisely the fourth) artist from Israel, who in recent years came into contact with the Czech art scene thanks to residency stay and whose creative process consists mainly of resewing second-hand clothes and remnants of fabric. The first such artist was Gili Avissar at the Meet Factory years ago, and the others were Merav Kamel and Halil Balabin, who spent their residency just as Ruti at Studio Prám in 2019. It is easy to see something ritually magical in their work. They process the fabric, the initially closest, most intimate matter to the human body, which was later put away, kept in storage or even discarded. The results of their actions have a certain degree of figurativeness and corporeality. It would be easy to glorify their creative strategy within the current context of recycling, which is so much needed. However, the meaning of their work intuitively leads to a different understanding. Although the following interpretation runs the risk of slipping into dangerous clichés and exoticization, which can be highly unpleasant for these artists, we can perceive their creative process as an undefined biblical parable that maintains the cycle of life for long-forgotten reasons. So far, it hasn’t come to light whether the formal connection of these artists is due, for example, to the guidance of a particular teacher during their studies or another determining circumstance. It is therefore possible that we simply choose from the portfolios entered in the open calls what we subconsciously find close to us but we still feel it is lacking on the Czech scene.

Textile sculptures of figures, sewn pictures and empty clothes are each a statement in themselves. Their distinctive morphology and a kind of internal nervousness, sturdiness, combined with Art Deco elegance, contrast with the poetics of a series of diary drawings, which complement the installation. Although Ruti naturally deals with personal and daily themes and, for example, draws herself with her two cats, she interweaves this diary cycle with decorative flowers, animals, and even frames. The crayon records, whose mannerism goes against their diary-like nature, are also connected by a spectrum of colours limited to warm tones of ochre, brown and sienna. Ruti calls this earthy scale, the Czech colours. The facades of houses in Brno and Prague, where she spent the last three months, distinguish by these shades from the mostly white or ivory buildings in Tel Aviv.