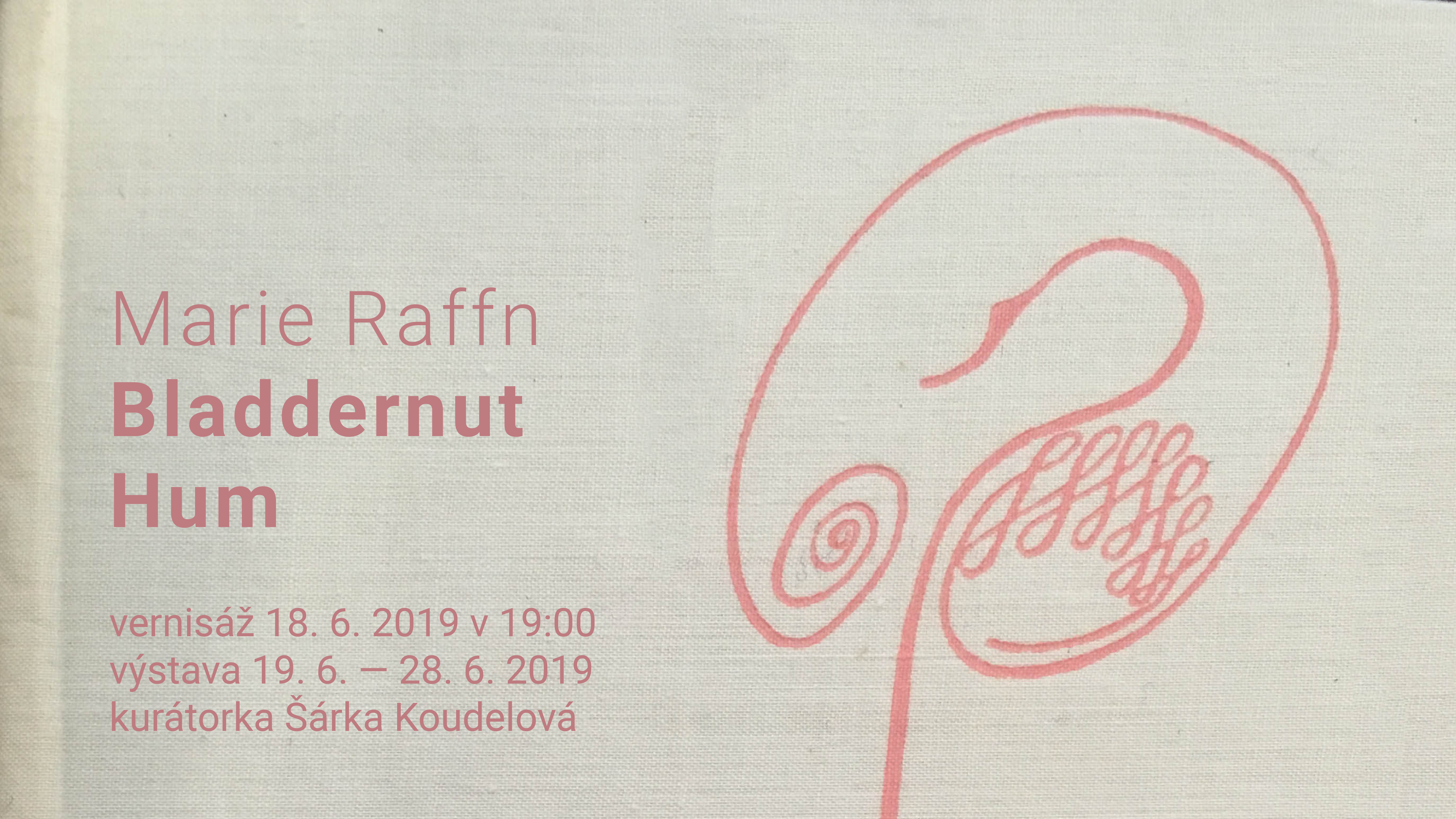 Marie Raffn shows up her work made during her residency in PRÁM Studio. The exhibition is called Bladdernut Hum and is curated by Šárka Basjuk Koudelová. We cordially invite you to the exhibition opening on Tuesday 18th from 7 pm!

“A rhizome has no beginning and no ending, it is always in the middle, between things, between existence, an intermezzo. A tree is a sucker (son-hood, growing from), but a rhizome is a connection, an alliance.” (Gilles Deleuze, Pierre Félix Guattari – A Thousand Plateaus)

In botany, a rhizome is a storage part of a plant created by modification of a stem – a subterranean stalk or a projection of roots. It functions as a storage organ for the plant when it hibernates during the winter. Rhizomes are harvested for practical purposes in spring and autumn, when the plant uses them as its reserve organ. If, such as at weeding, only the above-ground part of the plant is cut away, the plant can regrow again.

Writing texts for foreign artists exhibitions, this likely isn’t the first time that I am going to mention a book, which has become a “supporting vault” for the exhibition or in which the artist has found an inspiration. It is probably symptomatic of an artist who finds himself in a foreign environment to take some literary guide from his homeland. However, Danish artist Marie Raffn’s (1991) connection to a written text is not this situation-based. Marie’s intermedia art practice is often holds together by the visuality of a typography, the double impact of calligrams, the rhythm of poems, and also by the onomatopoeia of recitation. Perhaps because Marie naturally favours the free interpretation of already existing literary works, she didn’t search for the intimacy of her mother language in a foreign country. On the contrary, her attention was caught by a book found in a Prague studio, and it seems almost incredible how well this small poetic book fits her purposes. On a shelf, Marie has found a collection of poems, or better to say lyrics – Klokočí by Jiří Suchý. The title refers to one of the most famous melodies composed by the Czech artist duo Suchý & Šlitr, but it’s primarily a botanical name of a broadleaf bush. A bush with characteristic fruits of lantern-like shape that brings a very emotional context. Context of small shiny seeds, which were traditionally strung on a thread to make rosaries for the poor. This is what Jiří Suchý refers to in his melancholic, lovelorn text when he sings of “grandma’s bladdernuts”, a rosary inherited from a grandmother. All the inner and outer connections stemming from a bladdernut, related to one another as in its panicle’s inflorescence, are also connected to Marie Raffn’s exhibition. The gurgling sound of the title, the rhythmic counting of the rosary beads, and the deep emotional ergonomics between human and seed, otherwise unrelated, define both the conscious and associative relationships with which Marie works. Despite its surrealistic impression, the title of the exhibition, Bluddernut Hum, is obviously a synthesis of the creative process that preceded it. A process similar to an organic growth taking place from the outside in, a growth through the gallery walls, and especially Marie’s phonetic and visual reading of the Czech poetic text, meaning of words with whose general sense she has become acquainted but does not understand precisely. This situation seems to mimic a contemporary globalised world where we are all somehow able to understand one another, while still facing unknown words. Do such circumstances force us to employ our imagination? Does understanding depend on exact translation? And, most importantly, do we experience an unknown word physically more than conceptually?

The botanical bedrock in which the exhibition is firmly rooted is a typical contrast dichotomy of the nature. On one hand, there are firm rules whose visual aspect often seems more accurate and breath-taking than any digital calculation. The flying seeds of the poplar tree Marie carefully collected in the gallery yard remind viewers of a white cotton, but when observed under a microscope they seem to copy the shape of the parent tree. Similarly, the fan-shaped growth pattern of the bladdernut’s inflorescence, a panicle, or rhipidium, seems to portray fractal theory. Each larger unit is comprised of a mathematically arranged group of smaller particles whose shape corresponds to the overall composition. Rhipidium represents the main structure in the central part of the exhibition – a welded iron construction that grows through the space in a surprisingly fragile manner. Long stalks reach out, allowing the possibility of further reproduction as a cast blossoms on their ends. On the other hand, there is also rapid, organic, uncontrolled and barrier degrading  botanical growth similar to the Triffid-like world coming in through the gallery windows.

For Marie, this uncontrolled and unplanned growth is a natural metaphorical expression of subconscious association. The state of mind, when rationalised meanings of words are unclear to us, but we connect them unwittingly or through our feelings. The state of mind below the surface thoughts intertwine just like roots under the ground. Marie found inspiration in the sloping floor in one of the gallery rooms, and her installation there evokes the surrealistic world of growing roots and subconscious associations from which we are separated merely by a sensitive membrane. Its material gives a very physical impression: is it human skin or does someone cut out petals of it for all the flowers around?

The use of hard, technical materials to convey a flower’s fragility creates a paradox that is a spontaneous reaction to the studio’s surroundings. The neighbourhood with visible traces of its industrial history, where randomly put aside iron implements have been forgotten and are disappearing under anemochoric plants and a new face of the city. This post-industrial habitat has a clear impact on the look of the exhibition. The fragile connection between flower morphology durable austerity of machine-processed metal creates a space for anticipated social criticism. Man keeps on expanding his activity, replacing natural and fragile processes nonsensically and endlessly. Eventually, he will be forced to substitute such processes permanently. The culminating Anthropocene around us has become such an impenetrable urban reality that we’ve stopped noticing whether it’s insects buzzing or trains passing by, not to mention the sounds of what used to be a workers’ quarter. Or is it a reading of a text in language which we don’t understand? Does the complexity of the exhibition demonstrate just intertwining roots, or are these also contemporary information flows that grow through everything like internet connection cables?

Just as the echo of metal hitting metal is an inherent part of the Prague Libeň neighbourhood, Marie inevitably had to include an audio component. Audio records have been part of her creative strategy for quite some time as she combines almost technical sketch of space with the poetics of read words in a very sensitive manner. Paradoxically though, in her recording for the Bladdernut Hum exhibition she hasn`t read the poetry that was the starting point for her recent work. On the contrary, she focuses on the impact of sounds creating images in the imagination of the gallery’s visitors. We can hear the rustling of birds’ wings and we struggle through vegetation – we find ourselves present in the organic installation, which has come to life by means of an audio poem comprehensible to all. And it’s hardly surprising that a small speaker hidden among the casts reproduces sound via numerous small openings reminiscent of sunflower seeds arranged according to the Fibonacci sequence.

Clink! A surprisingly metallic sound is heard in the recording. A magpie stealing bits of a shiny metal waste in the neighbourhood has just probably dropped one right in front of the gallery.