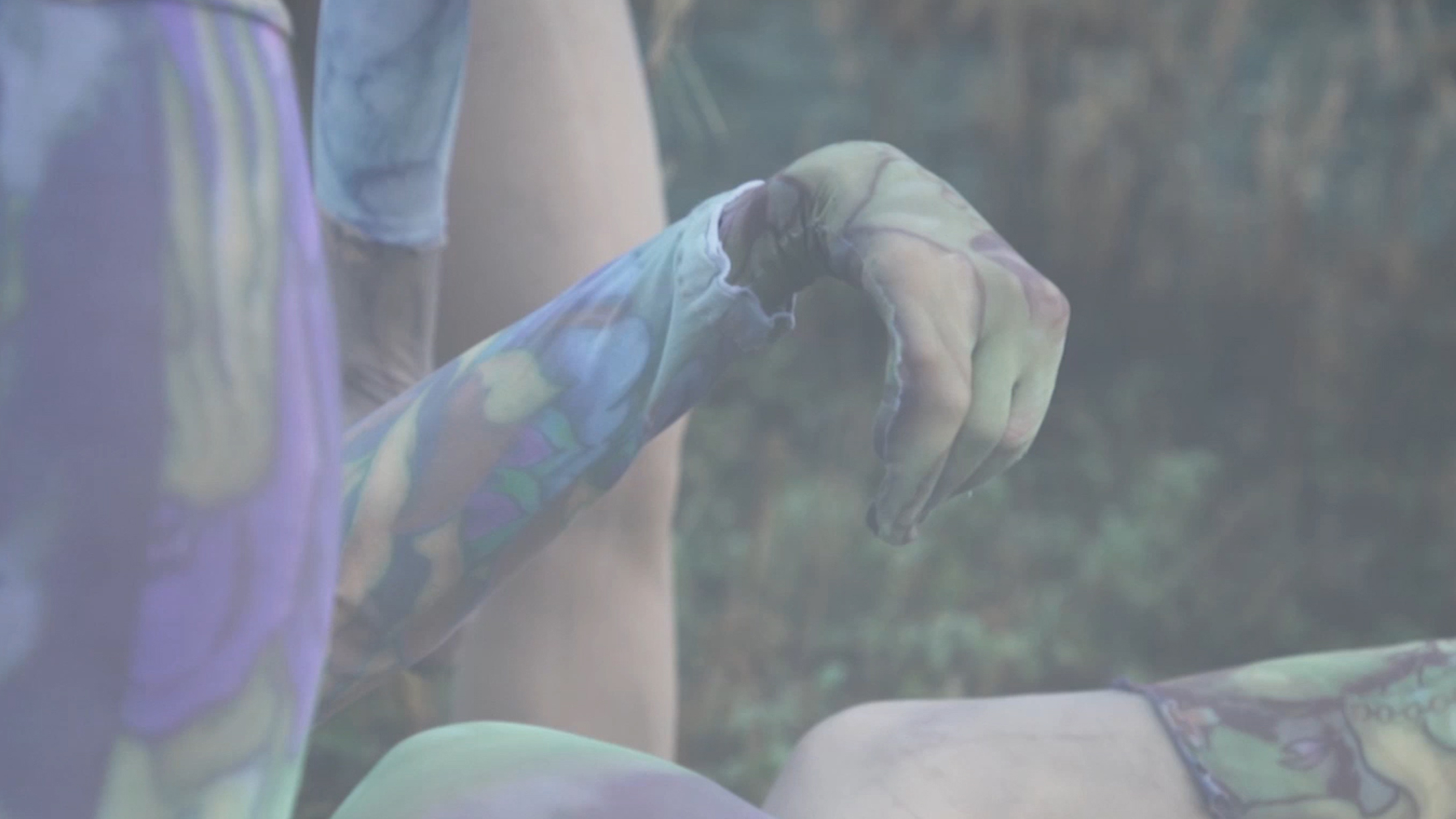 We cordially invite you our first exhibition of this year called Re-Enter The Plant by Nela Britaňáková. The curator is Šárka Basjuk Koudelová. The exhibition opening is on Tuesday 11th February at 7pm. The exhibition lasts till 3rd March and is open on Mon and Tue between 1-7pm or by appointment.

Nela Britaňáková (1995) is part of a young, rising artistic generation, and she naturally uses the current language of a fluid object installation in her work. To transmit the intended message and emotions, she relies on the contextual meaning of materials, a post-scenic configuration of trash or crafted objects, group performance (recorded or live), as well as a generationally symptomatic straddling between the pseudo-mythological visual remnants of the consumerist era and the hurl of these remnants back into the agonised natural environment.

Since last year, Britaňáková has been working with plant aesthetics and related topics, in which the work of Helena Johnová—founder of the Studio of Ceramics and Porcelain at the Academy of Arts, Architecture & Design—became the impetus for her bachelor’s thesis installation. Helena Johnová (1884-1962) was the creator of many sculptures and ceramic objects whose topicality is astonishing. It is as though the legacy of the poetic representation of blooming plants, alternating between a melancholic realism reminiscent of the atmosphere of Pre-Raphaelite paintings and figural personifications, was returning to life in Nela Britaňáková’s sensitive work, with its topicality and context of environmental crisis. The realisation that some of the plants which inspired Johnová are today endangered or even extinct species gave Britaňáková a distressing momentum, thematising the climate crisis. Although the focus of Nela’s current work shifts from implied environmental activism to the visual importance of an unsettling mythology, an ecological reading of her installations leads the audience to discover that the fabric and costumes used are recycled by the artist herself, who sews and tie-dyes second hand materials.

The notional key for the video Re-Enter the Plant, which plays a crucial role in the choreography of the installation at the Prám Studio gallery, is the book The Secret Life of Plants (Peter Tompkins, Christopher Bird, 1973), which represents almost a cult-like artefact for the author. In harmony with the new age movement, this literary work combines pioneering scientific methods with parapsychological experiments, esotericism, transcendental spiritual experience, as well as an environmentalist approach to living on planet Earth. While the impulses to perceive the land as a living being remain relevant, unfortunately, human society has made little progress in their application. In contrast to the overwhelmingly dire picture, however, three rivers have now been recognised as living beings with their own integrity and rights (Whanganui, New Zealand, Ganges and Yamuna, both in India) following pressure from indigenous people. Another subtle shift in today’s understanding of anthropocentrism can be seen in the approach by which Bird and Tompkins attempted to bring people closer to how plants perceive the world; from today’s perspective, isn’t the choice to make the personified plants in the book speak human language—contrary to the authors’ intent—another manifestation of man’s supposed superiority over all living things on Earth? Do we have to imagine an entity speaking our language before we recognise its right to exist and pay it respect?

In the gallery space, Nela Britaňáková creates this heavily ritualistic environment built for incoming viewers and defined by a processional composition of objects. After passing through the hymen-like “membrane” which covers the whole entrance, visitors find themselves in a compact environment, like the girl who is invited to enter a plant in the extract from The Secret Life of Plants—a key text for the author. The choreographic framework provides safe space and comfort for perceiving the main video, and yet its dystopian, disturbing atmosphere does not let us forget about the crisis going on outside. The ceramic objects, with their aesthetic and functional range, are symptomatic of Nela’s creative toolkit: clearly visual elements representing remnants of the haptic process that have their origin in functional objects—flowerpots. A simple thing like a flowerpot, i.e. an object that can be filled with a flower—an entity of a different nature, is now perceived as an explicit work embodying the concept of figurative personification. This filling up of a physical form with content that exceeds its frame represents a semantic parallel to the “filling up” of the plant’s body with the entering girl.

Nela Britaňáková’s creative strategy varies from the object of use to the intangible emotion of the performance and the viewer’s experience, with the ceramic object being the originator of both. Thus, Nela updates the traditional techniques of firing and glazing ceramics, making herself part of the still underexplored Czech and Slovak women ceramist tradition. She builds upon the above-mentioned work of Helena Johnová, Olga Hudečková, whose creations lie somewhere between utility and independent objects, and Sweden-based Klara Kristalova.