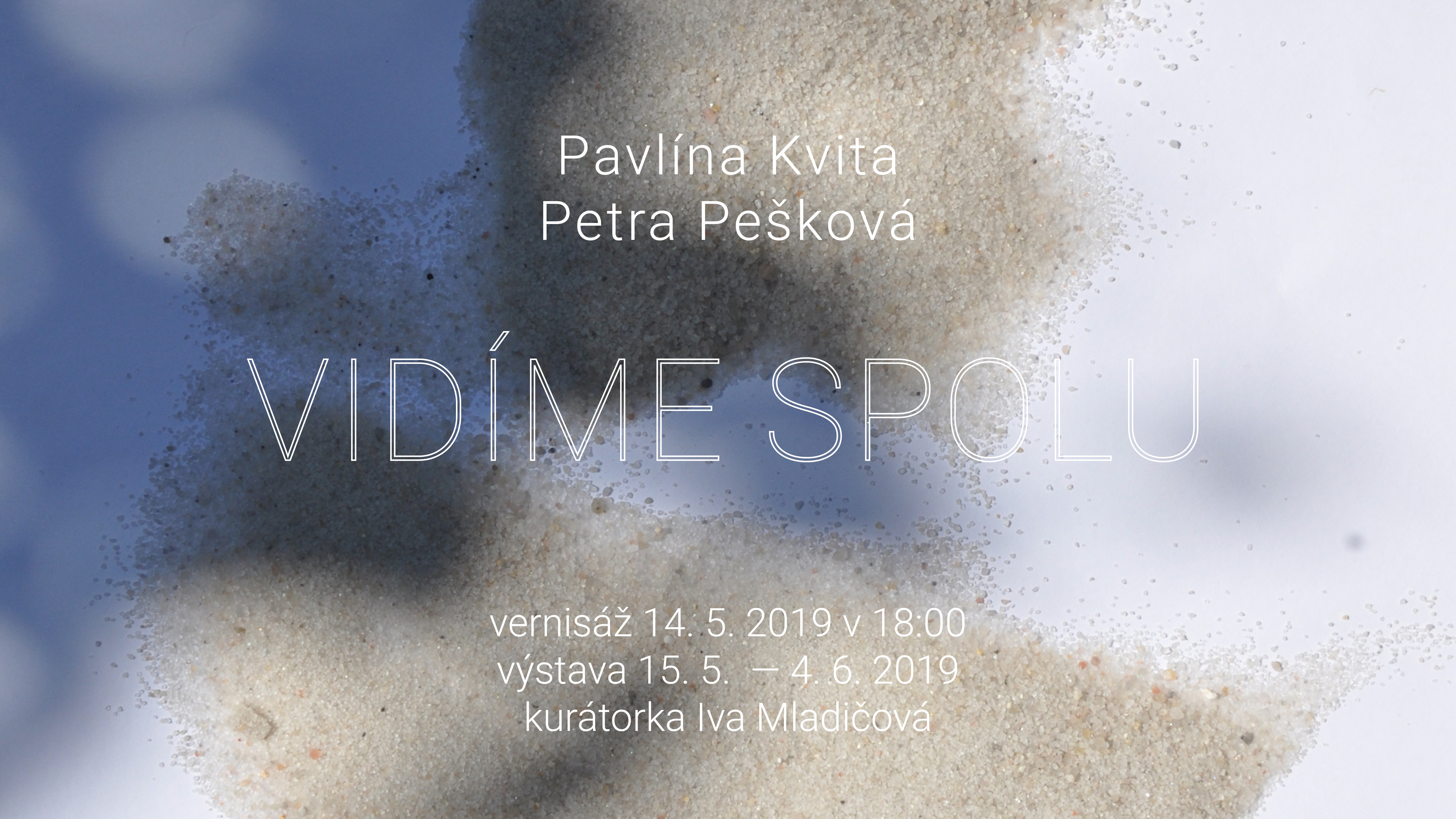 The idea of a joint exhibition of sculptors Pavlína Kvita and Petra Pešková developed as an opportunity to create a dialogue between each artist’s creative intersections and original personal delimitations, i.e. of a “together” raised, as in mathematics, to a power and extracted. Such mutual dynamics spring from their reflections on open space and the dimension of time, from the possibilities of stylizing shapes and interests while searching for inspiration in texts. Both artists explore the theme of specific landscapes, a common ground for their work. Pavlína Kvita finds inspiration in the structure of large city spaces, especially the suburban zone with its strange ambiance of inanimate temporary spaces which lack the social dimensions of a city and the freedom of natural landscapes, all while excluding the possibility of mental rest, of thorough identification with the space. Kvita transforms these characteristics into relief picture formats, into architectural models whose constructivist depersonalisation often exudes a feeling of apocalypse. However, her relief Post-Landscape (2018) shows traits of the artist’s poetic account of her personal inner space. This is where Kvita echoes recent works by Petra Pešková: imaginary landscapes, variations and combinations of symbolic constants—such as an island, a mountain, a lake or a cave—reflecting the much-longed for space of freedom. Both artists explore relations and possibilities of meaning in the mutuality of basic elements, giving space to the multidirectional growth of a multitude of variable compositions.

The artists’ inventive approach to stylizing shapes by means of abstraction is worth noting: Figural works by Pavlína Kvita are charged with futurist momentums, as if being built of lines which are later filled in with volume. As if the shapes were dictated by the functionality required by movement while also respecting sculpture’s elemental plasticity. The artist often uses feet, especially in the movement forward and upward. Similarly, in Petra Pešková’s reliefs and objects we find the expression of geometric lines, which, nevertheless, are the result of a transformation of psychological and literary meanings, such as in her cycle The Stations of the Cross (2015), a metaphorical expression of the difficulty of the individual and historical path, or in the cycle Crystallization (2017), which discusses the theme of psychological tension between immaterial thought and action.

Both artists find inspiration in their own texts or in texts by other authors. In her large-format artwork entitled Funnels (2014), Petra Pešková used Christian Morgenstern’s poem as the departure point, while her early reliefs featuring specific figurative scenes were inspired by her own text Live Flower, composed around the archetypal character of mutual relationships in which animals take the role of mediators and guides. The meanings of figurative compositions of fragmented movement in Pavlína Kvita’s works can also be found in her poems: “We are pilgrims,/ living on the Earth/ at the end of the journey we turn to dust/ permeating the Universe / unassailable composition of life destined to us / remedy to fear exists / you just mustn’t remain in that one and same point.

Acceptance of un-closed processuality, respect of the ephemeral: these are two characteristics Kvita and Pešková share in their creative approach to sculpture. In 2013, during her study internship in Utrecht, Pavlína Kvita explored the conscious approach to an idea of non-attachment to artwork’ durability. Kvita is primarily interested in public exteriors and their social and physical variability. She finds inspiration in the fleeting shape of melting snow or in the wax of a burning candle. Petra Pešková inhabits similar spaces: her decision to incorporate a found element – a fragment of an oven from a former glass factory in Kristiánov in Jizera Mountains – into her artwork is telling. Petra Pešková stresses the importance of the continuous self-renewal of landscape. It is the moment of processuality, of openness to change, that is the basic prerequisite for the creation of a joint artwork whose concept marks the origin of this exhibition. In the guise of a conclusion here is a fragment of texts by Karel Čapek and Vlastislav Hofman on Indian architecture that inspired the artist: “Every detail is architecture. / A roof that would rest on walls is nowhere to be seen, / forms and forms again rise, since the artist who built them, / wanted to build a silhouette in the sky.”

Petra Pešková (born 1988 in Uherské Hradišti) studied at the Academy of Fine Arts (AVU) between 2009–2015 (in the Sculpture Department of J. Zeithamml); in 2011 and 2015 she was awarded the AVU Studio Award; in 2012 she was among the finalists of the German Tennenloher Kunstförderpreis Award; in 2013–2014 she studied at the Akademie der Bildenden Künste in Munich. In 2014 she exhibited in the Prague GAVU Gallery – Silent Path (with A. Velíšek); in 2015 she held a solo exhibition Funnels in the gallery of the Institute of Macromolecular Chemistry of AS CR in Prague; in 2017 she created a site-specific installation Inside Outside in Karlova St in Prague and had an exhibition Crystallization in the Výklady AXA Gallery; in 2018 she exhibited in the International Museum of Ceramics AJG in Bechyně. Since 2004 she has participated in group exhibitions, e.g.: The Art to Help, Uherské Hradiště – Veselí nad Moravou – Kroměříž, 2006; Sculptures on a Parking Lot), Malostranské náměstí, Prague, 2014; Andante, Czech Centre Milan, 2015; AVU Graduates, Veletržní Palace NG in Prague, 2015; Monastery Garden, Dům Gallery in Broumov, 2016; No Goddess of Memory, MAGMA Contemporary Medium, Saint George, Romania, 2016; Sculptures of Šmeral Villa, Sv. Kopeček, Olomouc, 2016, and Beauty & Charm (14 contemporary Czech women-sculptors), Regional Gallery Liberec, 2019. She participated in several wood sculpture symposiums in Germany (Markneukirchen, 2012; Forst, 2013) and in Italy (Baselga di Pine, 2013), and is the author of Funnels on the Vítkov Hill in Prague (2014) and Wir 2/My 2 in Selb, Germany (2017).