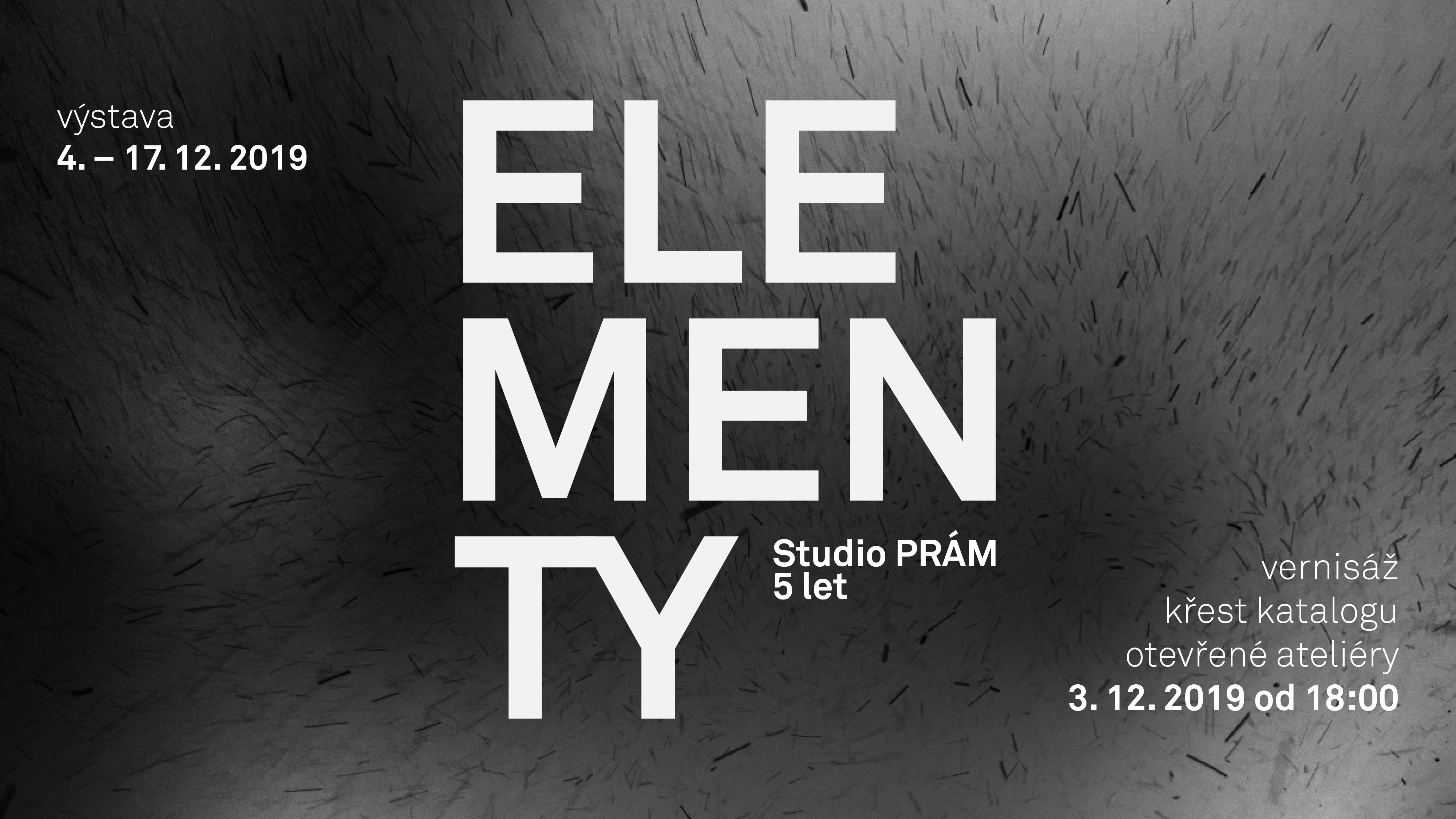 This year’s annual exhibition of the Studio PRÁM art association, as a small celebration of their common being, must not be missing. Artists who move across artistic genres of fine art and design will exhibit the latest works from the past year.

Atelier with excellent lighting conditions, workshop space, and a potentially exciting gallery environment. The set-up is suitable for traditional media, sculpture and painting. The current array of artists, and the gradual extension of invitations to foreign artists, provides opportunities for inspirational enrichment on existing themes and means of expression. These are the fundamental parameters of the artistic space in which, at first sight, a rich diversity of used techniques, materials, as well as communicated ideas, is noticeable. Its sense of being is confirmed by the creative output generated through the continuous support given to several recent graduates from the Academy of Fine Arts and the University of Applied Arts in Prague.

In general, a mythological form of thinking contrasts with a stark rational concept of space. In such an “unstable” environment, the relationships between individual elements – neighbourhood, separation, following, surrounding, continuity – plays an important role. It is such moments of continuity that provide the necessary incentives, artistic and social, for the current group of PRAM artists. The spectrum of subjects and means of expression create vivid multi-layered structures of inspirational reciprocity between the individual personalities.

For Dominik Běhal, Veronika Durová, Jakub Tytykalo and Pavlína Kvita, this reflects itself in, for example, an interest in the subject and FIGURAL FRAGMENTS. DOMINIK BĚHAL focuses on the live reinterpretation of the fresco technique. He takes on figural motives from black and white magazine photographs based on resonating associations with picture tableau from classical paintings of various historical periods. He therefore puts the awareness of the speed of the media of photography and the slowness of the fresco technique into incentive paradox. He is interested in working with light in such a way that it respects the metamorphosis of colour, the basis of this technique. The sculptor VERONIKA DUROVÁ uses figural fragments of the human body to inspire the viewer’s imagination towards figural entirety. The meaning behind the incomplete presentations is indicative of the present atmosphere within the social space. The moments of concealment, suppression, human detachment, intimacy and fear of openness are mediated through the cold expression and analytical manipulation of figural elements. However, the polarity of the nakedness and latency thereof are engagingly captured in the very essence of the stone sculptures.

A semantic level of OBSERVATION/FOLLOWING PRESENT SITUATION is apparent in the painters Martin Herold and Jakub Tytykal. The first surveys realistic situations, the second imaginary ones. Their manipulation of space is completely at odds with one another. Whereas JAKUB TYTYKALO interconnects the inner and outer areas, Martin Herold is interested in the separation of neighbouring environments and barriers. Jakub Tytykalo deliberately takes on motifs from paintings of classical surrealism. He highlights the significance of associations, magic gestures and the element of air. The scenes in his paintings are both alive yet lifeless, compact yet open. Abstract figural compositions blend with modular architectural assemblies; together, they produce specific open spaces. MARTIN HEROLD composes his paintings based on a lasting record of spatial, material, and lightning realistic situations, thereby often gaining a photographic character. He is interested in the thematization of the interface between two different environments, moments of distance, barriers between qualitatively different spaces, and of duality inside and outside. He works with the symbolism of windows, portals, with the semantic possibilities of illusional apertures. There is also, at the same time, an element of continuity across picture series.

THE SOCIAL DIMENSION of work is essential to Adam Trbušek, Josefína Jonášová, Magdaléna Roztočilová and Roman Kvita. While ADAM TRBUŠEK prefers a conceptual approach, choosing rational graspable topics, JosefÍna Jonášová liberally moves through the field of absurdity, dada and playfulness, gravitating towards exaggeration and humour. Adam TrbuŠek likes to create spatial works in urban or landscape exteriors. He is interested in working with symbolism, large formats and figural forms. His objects and sculptures often carry critical environmental undertones. JOSEFÍNA JONÁŠOVÁ reflects disparate inspirational moments of reality through absurd association, which she does with an awareness of a particular internal link rather than on the basis of a perception of it being pure nonsense. She prefers to place works in the liveliness of social spaces. The visualization of the moment of disparity can also be seen as self-reflective. The artist is simultaneously finding herself in the music field, where the directness of expression corresponds to the spontaneity of her creative nature. MAGDALÉNA ROZTOČILOVÁ often chooses subjects connected to female identity, as determined by social roles. The vivid colourfulness reflects her original focus on painting, her gradual transition driven by the need to directly work with raw materials. She enjoys thematizing the hapticity of the used materials, creatively and expressively combining lines with sculptural voluptuousness, working with symbols in the form of the totem pole, and stylization that consciously approaches the expression of pop art. She uses materials very inventively, often freely adopting them from ordinary reality.

Jakub Roztočil and Adam Železný let EXACT RATIONALITY enter into the process of creating work. For a long time, JAKUB ROZTOČIL has been fascinated by the possibility of artistically simulating intuitive anticipation, omnipresent of the principle of cosmic harmony. Conscious of the mathematical nature of music, he works with chord structure, with the recurring repetition of specific regularities of compositions and at the same time by chance. He is interested in an expression free from subjective emotional statements. He reflects the interconnection between the mystical and scientific. The resulting “painting” is a kind of hypnotizing structure of point acrylic stains applied with the help of sophisticated machinery, or a complicated composition combining painting and effects of gravitational force through colour, thereby inducing the feeling of microcosmic and macrocosmic presences. It is a form of insight into the harmony of life itself. ADAM ŽELEZNÝ, under the influence of scepticism towards temporary design in the field of ceramics and porcelain, resorted to experimenting. He was always interested in functional shapes. He creates a “never-ending” cycle of vases and bowls whose form is determined by controlled explosion. He is intrigued by the reality of the final shape, which arises in a few milliseconds, and which is preceded by lengthy preparations based on concentrating on scientific characteristics. He transforms the initial shape of the vase or bowl into a sculptured object, which often has a biomorphic character. Although chance will always be present in this process, Adam Zelezny strives for the maximum possible rationalization of the expected result.

Let us conclude with the creative duo Pavlina and Roman Kvita because they are symbolic of the contemporary art group PRAM. The main engine of their cooperation on several designs and sculptures for public spaces is RECIPROCITY. Although the prevailing domain of ROMAN KVITA is scientific thinking and Pavlina Kvita often initiates the basic conceptual shape, object or statue, their works are the result of their joint inspiration and complementarity. Similarly, they both perceive shapes, emphasize light, respect the human scale with regards to proportionality, and are interested in organic architecture. For Roman Kvita, who focuses on design, the opportunity to work in an environment of sculptors and painters is fundamentally inspiring. PAVLÍNA KVITA is interested in shape metamorphosis. For a long time now, she has been engaged in the interpretation of figural shapes in the spirit of futuristic momentum, respecting the principle of sculptural plasticity. At present, her works are inspired by thoughts provoked by essential earth elements – water, fire and air – and the polarity of the sun and the moon. Shapes of a figural character rise from dynamic compositions, whereby the transformation of principal shapes and the mutuality of the elements is related to the artist’s acceptance of open processuality and her respect for temporality. That is why she is also interested in creating works for public spaces in all its vivid versatility.

A fundamental ELEMENT can be found in all the aforementioned artists, one which codetermines their artistic work as compact distinctive testimony, both from the formal and the thematic point of view. There is frequent interest in specific materials and procedures, sometimes complex and lengthy. Nonetheless, finding the common denominator among the creative principles of these artists is not as impossible as it may seem. In a way, we share a common space and perceive the significance of social togetherness. At the same time, this visible characteristic is modestly present in the works themselves, reflecting the artists´ holistic perceptions of life and the world in general as a SEMANTIC INTERLINKED UNIT.

► Thanks GoOut.cz and Radio 1 for a PR support.