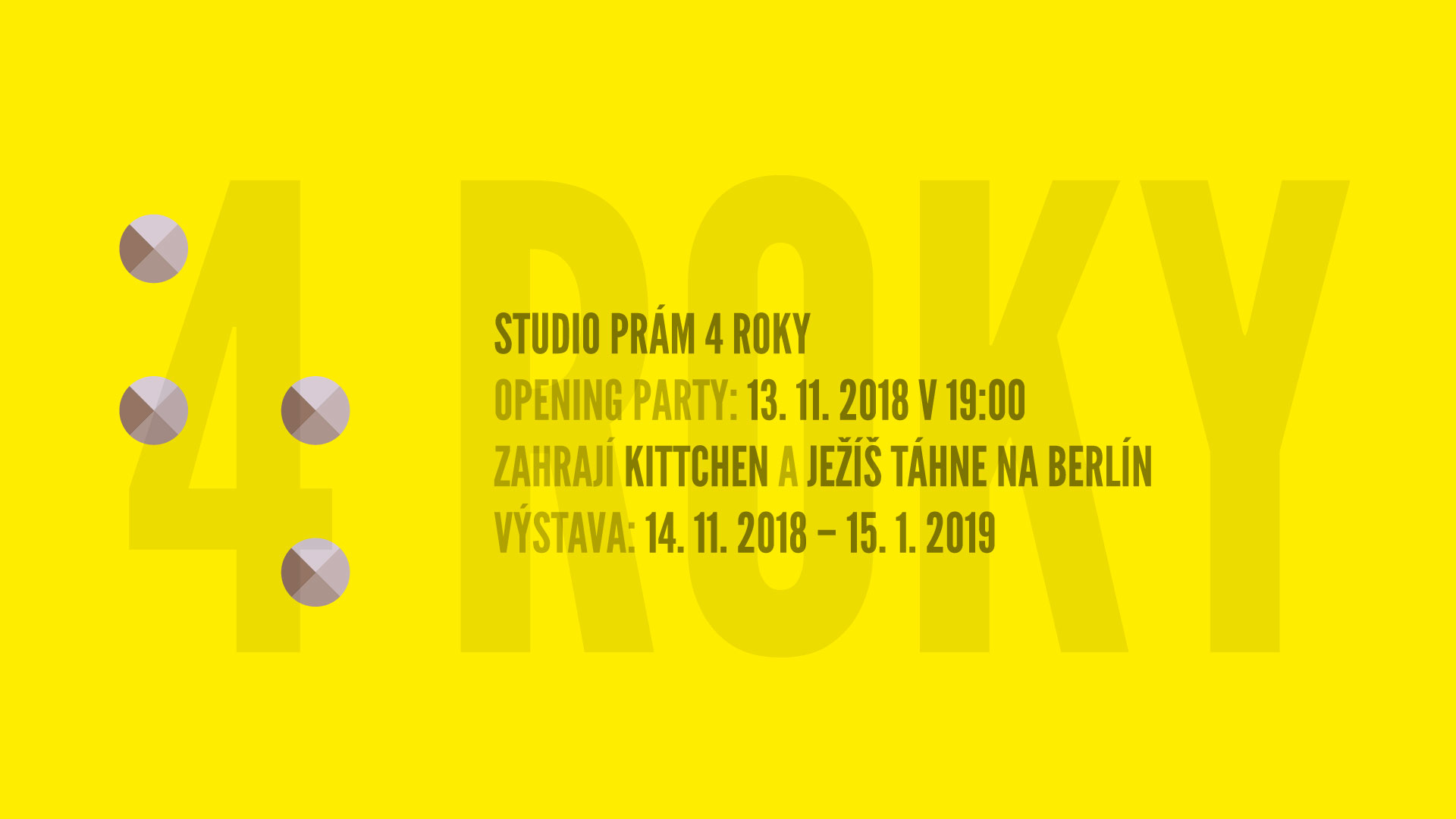 We cordially invite you the four year anniversary celebration in the end of the world. Brownfield, chimney, art and music. PRÁM Studio holds its traditional annual exhibition. Kittchen and Jesus marches on Berlin will perform on the opening party on 13 November, 2018. Free entrance.

On the occasion of the fourth anniversary of its existence, Studio PRÁM presents a group exhibition of all its members. Their work is spread on a wide field bounded by poles of applied and fine arts, and in which there are mergers and overlaps of these positions. Integral part of Studio PRÁM programme is the artist in residence programme, which is continuously presented by solo exhibitions of the guest artists.

This exhibition presents the dialogue of works by Studio PRÁM members, but its goal is not necessarily looking for connections between often different approaches to fine and applied arts. At the same time, however, the exhibition does not resign the possibility of accentuating the charge of the artworks brought by PRÁM`s genius loci and microclimate of its community.

Jakub Tytykalo shows the set of his recent paintings. There are two, lately dominating lines of his grotesque fragmented painting: complex figural composition and more austere canvases, where the appearance of the depictive parts, in this case zoomorphic elements, are approaching visuality of a sign.

Jakub Roztočil shows the quite opposite of a painter`s approach. His paintings paraphrase the cyclicality processes in nature and the universe as well as the rhythm of music. Roztočil disrupts certain depersonalization given by repetitive and formal perfection of these technically created artworks by his own physical interventions within the creative process.

We can be on doubts in front of precisely executed artworks of Barbora Klaška, whether we are watching designs of futuristic objects, jewellery or some kind of zoomorphic portraits (Spells, 2018 and Foxy, 2018). The opposition of geometric and organic shapes, attractive forms and simple themes indicate the ambivalent tone of these artworks.

Pavlína Kvita`s sculptures (Torsos, 2018 and Walkers, 2016) phase movements of some humanoid forms in space. The three-dimensional Muybridge-like sequences stay with their abstracted forms unresolved and suggest that, rather than real movement, it is a shift in the metaphorical sense and internal impulse.

Dominik Běhal uses fresco technique in his work, which is traditional on the one hand, but at the same time it is minimally used in these days contemporary art production. Běhal`s strategy of mobile fresco on the board can be understand as an attempt to rehabilitate this medium and allow its gallery presentation. The motifs of his latest paintings are based on designs of unrealized historical buildings.

Martin Herold, in his last cycle, thematises the abstract language of architecture, presented by the painting Entrance (2018). However, by the realistic representation of existing places he leaves them their narrative content.

Adam Trbušek reflects the problem of contemporary society in his works. The repeating motif of the toy in his artworks symbolizes a medium of manipulation of a human in the current capitalistic environment. In his artwork Where the way leads (2018) he puts various brand logos into its cellular like structure, and creates a monument, which is threatening and perverse at the same time.

Humour, shortcut and content lightness dominates Josefína Jonášová`s oeuvre, although she does not avoid even more serious subjects. Presented artworks shows her drawings as a way of expressing the straightforward ideas and as a draft for a sculpture (Freu(n)d, 2017).

Artworks made by Magdaléna Roztočilová has a wide span if it goes about the thematic range, as well as material scale. The form of her figurative statues represents the thinking process of featured characters.

In Veronika Durová`s figurative artworks, what is missing due to our expectation, has got an equal importance as the depicted. The author pays attention to the fragments of human or animal figure and leaves a space for the audience to think of other connections.

Adam Železný puts an emphasis on action, which puts his work into border of fine and applied arts. For example, the containers from Blast (2014) series have been created by detonation, performative character was specific also for audio-visual project Tabula Rasa (2015–2017, cooperation with L. Železný).

Roman Kvita is engaged especially with product design. His outreach is wide, from a glasswork over furniture, interior design to exhibition design. An attention to detail, idea and compact whole is essential for him.

Thanks GoOut.net for PR support.